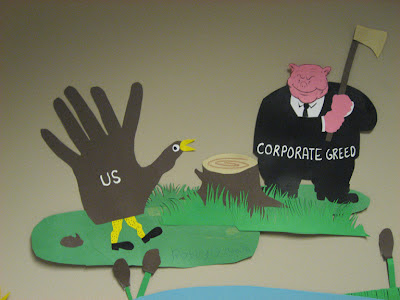 I recently found out that, due to the Hollywood writer's strike, I'm going to be laid off from my day job as a Storyboard Revision Artist on American Dad on November 30th. God knows how long it will all last. When this all began, I found myself siding with the writers, but had to admit that there was a bad taste in my mouth knowing that I could be out of work for guys who are making a lot more money than I am. However, as this proceeded and I've learned more about the situation, it's become easier to support them even though I'm looking at some lean, lean times ahead of me. One reason is because I see this as a creator rights issue. I think most people would agree that the writers of these shows are entitled to get a bigger percentage than the .36% they currently get for video and DVD sales and if I'm not mistaken, nothing for internet downloads. That's about 4 cents for a DVD. They're asking for 8 cents. One example I've read is that the guys who manufacture the box the DVD comes in gets more than the writers of the show it's packaging. It's criminal.

The other issue that bugs the hell out of me is knowing just how much C.E.O's make at these corporations. According to this at the Los Angeles Times, Viacom paid their old chief executive Tom Freston a 60 million dollar severance package. That's how much he got when he was fired. That is more than what the entire industry paid in writer's residuals. That's just obscene and I can't imagine Viacom shareholders being pleased that 60 million dollars went to pay Freston, when a fraction of that could have gone to the writers and avoided a costly strike. Those are some odd priorities for business.

For more info on what this is all about, here is another good L.A. Times article. The writers have my support for as long as this lasts, but until the end comes, maybe someone out there can pass a little illustration work my way.
Posted by Robert Goodin at 10:27 PM

Hang in there Robert. I'll keep my antennae out for illo work.

Thanks, Mike. I appreciate it.