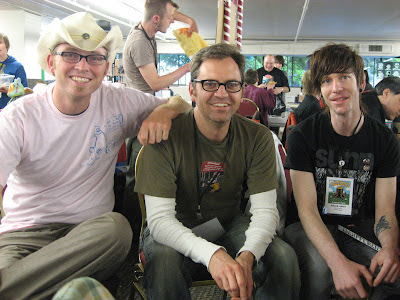 Georgene and I began Stumptown in a bit of a hole in regards to rest. It was a long drive from Los Angeles to Portland, spread over two days, and we did not get very good sleep when the opportunity arose. Again, we stayed at the beautiful home of Top Shelf publisher Brett Warnock. One of my favorite things about visiting Brett is that one small block away is a fantastic coffee/donut/gelato shop. I started off every morning with a warm maple and chocolate donut and an espresso. I can’t imagine how fat I’d be if I lived next to that place.

Because we were constantly exhausted (and I was getting killed by the pollen in Oregon), Georgene and I didn’t socialize a whole lot. We went to the party at Cosmic Monkey Saturday night, but it was so packed and we were so tired that we split after about 15 minutes. We were in bed by 10:30. 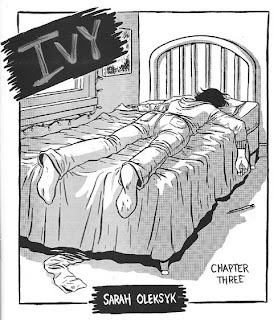 We did have a great time at the show, however. I picked up a ton of mini-comics, many by artists that I had heard of, but not read. One of those was Fart Party. I bought the recently published book and artist Julia Wertz was kind enough to throw in some of the latest minis, so I’ve got it all now. I’ve read through some of it and it’s some funny stuff. Another comic that I’ve heard a lot about, but never read was Alec Longstreth’s Phase 7. I picked up issue 13 and it was an enjoyable lesson on the history of common people represented by art. I’ll definitely have to pick up some more issues at my next show.

Probably the best drawn mini I got over the weekend was Sarah Oleksyk’s Ivy. I haven’t had a chance to read it yet, but you can see by the cover that Sarah’s got some drawing chops. Getting the subtle foreshortening and perspective right aint easy, but she’s able to pull it off and keep the drawing lively. I can’t wait to read it. 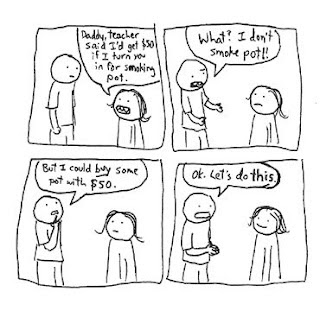 Something that I have had a chance to read is Joey Sayers’s I’m Gonna Rip Yer Face Off! This is a collection of one page, crudely drawn, but very funny comics. They tend to be absurd and somewhat psychotic. If that’s your bag, check it out. Other funnies that I came home with are Cartoon Dialectics vol. 1 by Tom Kaczynski featuring some stories that have not been in Mome; MariNaomi’s Estrus Comics #5, Lauren O’Connell’s Thrillsville, and issues 7 and 8 of Liz Baillie’s My Brain Hurts. I also got some books by table neighbor’s Sabin (Ambassador Magma) Calvert and Jeff (Jimmy Trout) Chapman. Those are the lads flanking me in the photo.

The last little treasure was not purchased at Stumptown, but at my regular pilgrimage to Powell’s bookstore. It’s a children’s book from 1951 called Rosalinda. It has some fantastic modernist illustrations by Jan B. Balet. I had never heard of him before finding this book, so it was a nice discovery. 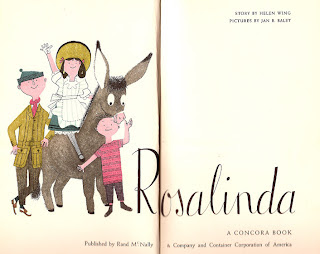 It was regrettable that Georgene and I had to miss out on many of the parties held around the show. Hopefully at our next show, MoCCA in New York, we will have better luck. I’m not optimistic however, since my flight will have 2 connections. With the way air travel is these days, I’m not even sure that I’ll get there within 24 hours.
Posted by Robert Goodin at 11:32 PM 4 comments: 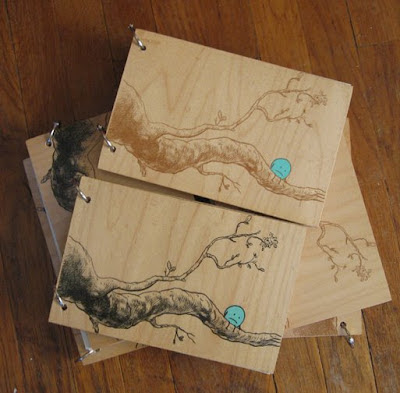 This weekend I will be at the Stumptown Comics Fest in Portland. I've got some new postcard designs as well as some new sketchbooks / Journals on maple plywood. None of these are comics, but I've got some new comics out soon, just not for Stumptown.
Posted by Robert Goodin at 9:38 PM 5 comments: 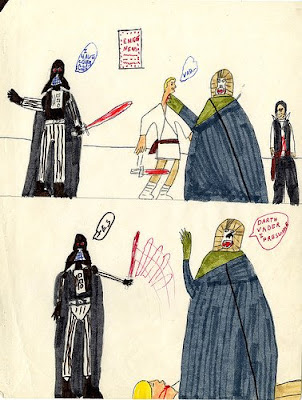 Here are some childhood Star Wars drawings drawn by Anthony Vukojevich back in the 70's. Go here to see more of his prolific prepubescent output as well as some recent stuff.
Posted by Robert Goodin at 10:16 AM No comments: