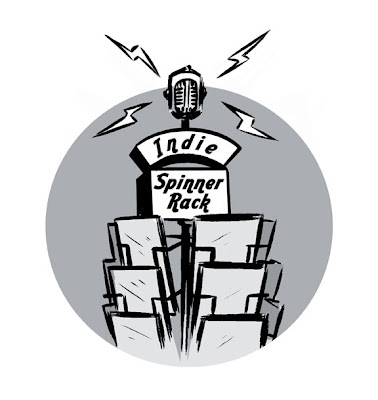 Podcasts have been a godsend in keeping me in my chair while drawing all day. However, I find that I often listen to my regular shows faster than they are produced. I'm wondering if folks out there would like to mention some of their favorites in the comments section so I can discover some new shows. Here is a list of what I listen to (all can be found on Itunes). Maybe you will find something new...

Indie Spinner Rack All about independent comics. The hosts are goofy. At least one of them is.

InkStuds Also about independent comics, but with a different vibe.

KCRW's Left, Right and Center Political punditry that claims to not scream, but lefty Bob Sheer occasionally gets close. Not that I blame him.

The Skeptic's Guide to the Universe Skeptics take on everything from faith healers, to free energy, to acupuncture.

Bill Moyers Journal This never fails to depress and outrage me. Moyers covers stories that I wish others in the press would cover. We live in a corrupt world.

Astronomy Cast I just started listening to this one. Today, I learned all about various theories of dark energy. Rad!
Posted by Robert Goodin at 10:42 PM 4 comments: 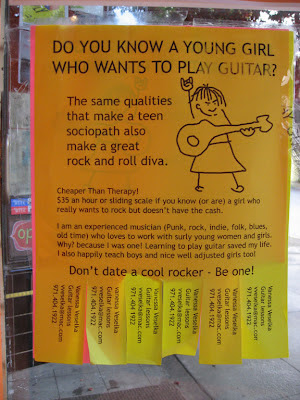 I’m always amazed that people are able to blog about a convention the day after it happened. The day following a convention, I am usually unpacking, washing clothes and generally exhausted. This year was even worse since Georgene and I drove from Portland to Los Angeles in one day and I went back to work the following day. It seemed like I was tired for a week and a half. With most of the indy comics world focused on SPX last weekend, I will finally get a small report out.

Our first day was spent looking at houses and neighborhoods in Portland (we’re considering moving there). While we were driving around we stopped by the amazing Powell’s bookstore where I picked up a copy of Bob Gill’s The Millionaires, from 1959. The Millionaires is a black and white picture book that was used by a university instructor of mine to teach us good design in laying out a book. We followed our visit to Powell’s with a trip to Floating World to check out the Al Columbia art show. The show was great and I picked up a Columbia poster as well as The Complete Universe of Dupuy / Berberian. This is a fantastic book filled with illustrations and drawings by two of my favorite cartoonists in the world. Their luscious, confident line work actually shares a little in common with Bob Gill’s. 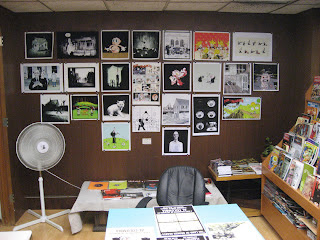 The next two days were spent at the Stumptown show, which was much, much better than last year's. In 2006 I got the impression that the dealers were just selling comics to each other, with few real attendees making it to the convention center. This year was very different. The show was held in a much cozier location with more people attending. Something I found impressive with Portland is the strong DIY vibe there. I sold a lot of stuff wholesale to people that owned quirky stores / galleries. One of those stores, Tender Loving Empire, is also a music label and publishes mini comics (check out Pinwheel). It’s good to see and I wonder if it is a little easier there since residents are pretty successful at keeping large chain stores out of the city, allowing independent businesses to survive and thrive.

While making the rounds on the floor, I came across Papercutter. This anthology features 3 artists per issue and is only $3. In terms of format, it’s much closer to Zero Zero than Mome. I find this refreshing because with only 3 artists an issue, if a reader likes 2 of them then that is a 66% excitement ratio, which is pretty high for an anthology. Keep in mind that I have been in a few of these bigger anthologies and even edited and published some of them, so I’m no enemy of the bigger format, but it’s definitely a nice change to pay 3 bucks for Sarah Oleksyk, John Porcellino, and Vanessa Davis. Plus, I really miss buying pamphlet comics. It seems like a rare thing for me these days. 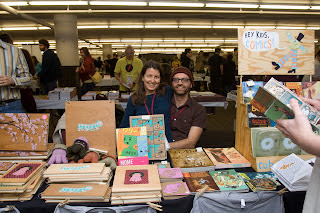 Other finds over the weekend include New Tales of Old Palomar #2 (which was great), the hilarious Krayon’s Ego, Superfuckers #279 (my favorite Kochalka comic), Super Spy, The Mourning Star Side Story 3, fellow CSULB alum Joshua Kemble’s Numb and some more things that still need to be read. It was a great show, we met some more great people, and I hope to make it again next year.

I’d also like to give a huge thanks to Top Shelf publisher Brett Warnock, his wife Lisa and rocker kid, Carter, for hosting us over the weekend.

The photo of Georgene and I is by Stumptown phototgrapher, Joshin Yamaha.
Posted by Robert Goodin at 10:29 PM No comments: