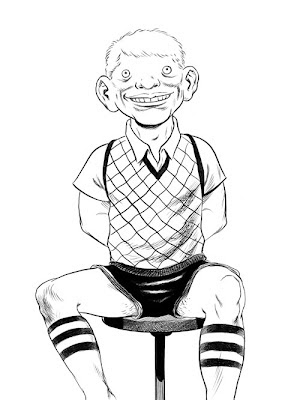 I've been doing some production work on my upcoming comic The Man Who Loved Breasts and thought I would post the back cover. It's of the title character from the second story, George Olavatia: Amputee Fetishist. As I've been scanning all the pages and cleaning them up, some of my drawings bug me. They seem a little awkward and clunky. I figure this is typical of artists and if I redrew everything that bothered me it would take 5 years to do 30 pages of comics instead of 1. I'm just going to have to let them go. I did, however, like this back cover drawing, so here it is. Hopefully I can get this all finished so it can debut at MoCCA in NY in June.
Posted by Robert Goodin at 5:07 PM 3 comments: 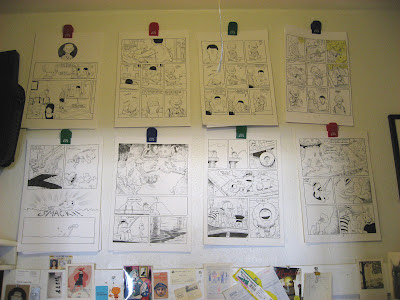 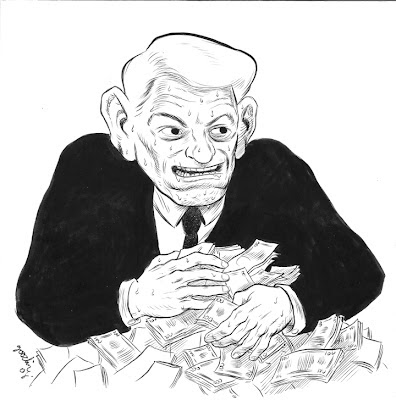 One of the best arguments I've read on getting money out of politics was in this article in the Los Angeles Times. Chamber of Commerce president Tom Donohue threatens to punish all political candidates who promise to do something about reigning in corporate behavior by spending over $60 million to defeat them in the elections. He says, "I'm concerned about anti-corporate and populist rhetoric from candidates for the presidency, members of Congress and the media. It suggests to us that we have to demonstrate who it is in this society that creates jobs, wealth and benefits -- and who it is that eats them."

I guess he's forgotten about the people who work for these corporations and who need a living wage. In response to his threat I did a drawing of him. It's about as subtle as a brick to the face, but I find that he's such a caricature of the greedy, white capitalist, that it was appropriate. I'm selling it on comic art collective and will give the proceeds to my populist of choice, Barack Obama. It's not exactly something anyone would want to hang on their wall, but it's for a good cause. You can line your bird cage with it, the point is that it's now $35 vs. $60 million. Take that Donohue!
Posted by Robert Goodin at 3:04 PM No comments: