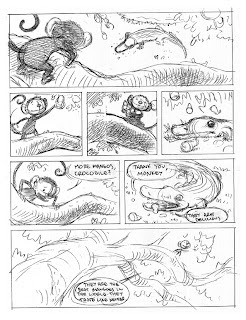 I was looking over some old work and it reminded me of a rather long story that happened to me a few years ago. It's a long enough story that I'll have to tell it in parts.

A few years ago, my girlfriend Georgene and I decided to spend a year in France. As plans developed, we got engaged and the idea morphed into a year long, working honeymoon in Paris. I was a full time, burned out storyboard artist working in animation. Georgene was a full time, burned out producer of TV movies. The plan was to save our money so we could focus on our dreams: drawing comics for me, writing a novel for her. 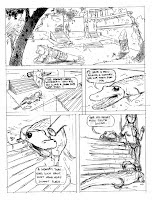 Eighteen months before our trip, I had to leave my job for a variety of reasons. I thought I would quickly find more work, but that was not the case. Hollywood writers had threatened to strike and studios produced a surplus of shows in anticipation of the downtime. The strike never happened, but there was still not much work to be found because shows had been stockpiled for up to two years in advance.

Eventually, we did make it to Paris, or one metro stop outside of Paris in the town of Montreuil, but we only had money to get through six months. Georgene had done her part, but I had failed in doing mine. I needed to find a way to make some money. 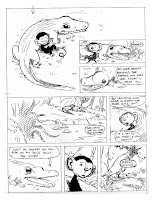 Miraculously, France’s annual children’s book expo would take place right across the street from our apartment, two weeks after we arrived. I printed out some of my work and hand stitched mini portfolios in preparation for the show. Fortunately, one of my comics, an adaptation of an Indian fable called The Monkey and the Crocodile, had been printed in Switzerland, so I had a French language comic to show. 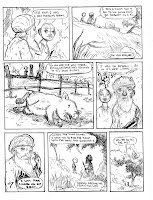 Georgene and I went to the show hoping to find me some work. This was exhausting for Georgene. I didn’t speak any French, so she acted as my agent/translator for two long days. Georgene’s French is pretty good, but there is a big difference between getting around town, and instantly translating multiple conversations. 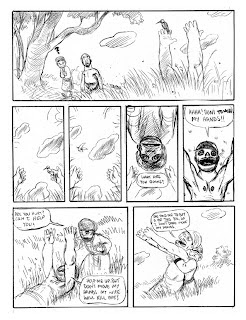 We talked with 20 publishers or so over 2 days. No luck. On the last day, at the last publisher, lightning struck. This publisher printed both children’s books and comics. While looking at The Monkey and the Crocodile, the editor mentioned they were doing comic books of fables from around the world. They had already done Thailand and Vietnam and were looking for someone to do India.

A few weeks later, we met with the editor at his office in Paris. The book he wanted me to do would be a typical, European comic album; a hardcover, 32 page full color book. The deal he offered was a very reasonable per page advance against royalties. Best of all, the advance would be paid as I delivered the color pages – I would not have to deliver the complete book to see the money. After giving me a copy of one of the collection of Vietnam fables that they had just published, the editor told me to contact him when I knew what stories I wanted to use in my book. 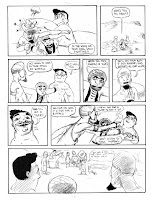 I couldn’t believe my luck. Christmas was in a few days and I’d been given an early present. I’ve liked French comics since first discovering them in the mid-90’s. Now, one of these books would have my work in it and I would be getting paid decent money, especially when compared to independent American comics. It was as if some hand had perfectly guided me down this path. By dumb luck, I found a way to make a living drawing the kinds of comics I wanted to draw. I could do a slightly commercial book to bring in enough money to live on, and do quirky, less commercial (meaning non-paying) work on the side. It was a way to make a small living, retain some integrity, and do what I loved doing. I had found Jesus’ challis.

Part 2 of 2 will be posted on Wednesday.
Posted by Robert Goodin at 7:56 PM

this blog is great fun. i really like your inking style.