After another meeting to go over my story choices, I roughed out 30 pages of comics. One of the stories would be a new version of Monkey, but compressed to fit the French mainstream taste in storytelling. I’m not the fastest artist in the world and, then, I was even slower since drawing comics was still rather new to me. I spent a few months on the roughs and took them to the editor. He liked them. A lot. While I was sitting in his office, he made copies to give to the marketing department. He also asked me to think about what country I would like to do for my next book. 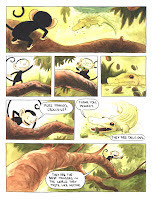 Life looked really good. Now I needed to color the pages so I could start getting paid. Our finances were getting low, so the timing was perfect. I decided to paint the pages because, in general, I’m not the biggest fan of computer coloring and whenever I tried it myself, it turned out terrible. The down side was that it took me about a week to paint one page.

I dropped off 3 pages to the editor and waited for his response (The images seen here aren't very good scans). If all went well and they didn’t want many revisions, I would get paid for those pages and could focus on doing as good and as fast a job as I could. I don’t mean to focus too much on money here, but things were pretty tight and we were getting desperate. 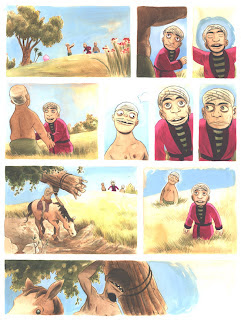 By now, summer had arrived. Our landlords had sublet the apartment back from us for two weeks and we were going to go to Nice for that time. If you’re going to be poor, it might as well be in the south of France. I still hadn’t heard about my pages, but decided to bring my work. I would paint in the morning and spend the rest of the day at the beach.

Every day we walked a couple of miles to check e-mail to see if my work had been approved. We fantasized about doing things we could not normally afford to do, like going out for a good dinner instead of cooking every meal ourselves, and maybe some shopping. Day after day, for two weeks, no e-mail came. I was getting a little nervous and scared. By this time, I had painted almost 6 pages.

I called my editor as soon as I returned to Montreuil. He had me come in, Georgene acting as my translator, and said the paintings looked too much like illustration. He wanted to know if I could computer color the pages. This was upsetting. I didn’t want my book to look like the other mainstream French books and felt computer coloring would take away a lot of its charm. However, we needed to eat and pay rent. In the face of this kind of desperation, I probably would have had the X-men guest star if it meant I could get some cash. I was also incredibly frustrated that all that time I spent painting in Nice was a complete waste. I’d have much rather wasted my time at the beach.

I quickly inked up 3 pages and tried my hand at coloring them. After e-mailing them in, I waited and waited. I continued inking more pages, again thinking that once they were approved, I would have that much more work done and would be that much closer to getting Georgene and I out of our financial hole. When I finally got a reply, I was told my coloring wasn’t up to snuff. No real big surprise there, I suppose.

My next step was to ask my friend, Nora Murphy Berden to color it for me. Nora has done coloring in animation for years. She tried 3 pages. We waited 5 weeks for the editor to return from the vacation the French take in August. He passed on Nora’s pages. I suggested using one of their house colorists to do the book. They must like him! My editor said that although my idea was a good one, the colorist I mentioned was busy. What about any colorist? I never got a response.

This experience left me feeling like I was crazy. Had I screwed this up somehow? I was never given any explanation for why my book was killed. One theory we had was that the two books they already printed had tanked. In fact, in searching their website, we never found any books in the series except the two that were already printed when we first met the editor. But if that was the case, why not simply tell me? The coloring issue didn’t make any sense, because I’m sure they could have found someone they liked to color it. It was a nightmare. Georgene and I ultimately went into debt and I returned to the animation industry for a little while when we moved back to the U.S. to get our finances in order. I did try a few other publishers, but a comic of fables wasn’t a very commercial thing to print. I was able to salvage one story, “Moon Lake” and had a color version (by Nora) of the story on Serializer.net. I reworked it a bit for black and white and printed it in Apres-Shampooing.

In looking back on the experience, I’m somewhat haunted that I didn’t demand an explanation. I’m not sure why I didn’t. Maybe it was because I was in a foreign country and didn’t want to cause problems. I also think my confidence had completely crumbled. All of those stages of trying to make things work really messed with my head. Every day I thought today would be the day I’d be told everything was great and could continue. It was miserable. By the time it came to an end, I was spent, and just didn’t have the energy or the confidence to demand answers.

I never got a penny for any of it. I did learn a costly lesson about signing a contract up front. The whole experience was an absolute heartbreaker, but I’m sure many artists have something like this happen at one time or another. Fortunately, having a blog makes it possible to show some of the work to people. Hope you like it.

Notes: The computer colored pages on this post were done by Nora, not me. I'm not sure what happened to mine, but they weren't too hot.
Posted by Robert Goodin at 9:42 PM

Hello. Nathan here. I just got you pig's missing poo book and I love it. Those new versions of monkey and crocodile look great.

They were crazy. Those painted pages are insanely beautiful.

But a book of fables would TOTALLY work in today's "literary" comics market! Pitch it! Actually could you email the color version to me?