A Small Preview of Upcoming Work. 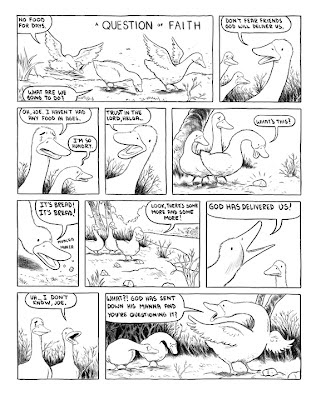 Over the next 6 months or so, I'm going to have a number of comic stories popping up in various publications. Up first will be 2 short stories in Awesome: The Indie Spinner Rack Anthology. If you are not familiar with it, the Indy Spinner Rack is a podcast showcasing the world of indie comics with some reviews and interviews. Included in the anthology are a lot of cartoonists they've either interviewed or discussed, including: Alec Longstreth, Al Columbia, Jamie Tanner, and Nick Bertozzi. For a full preview click here. My stories are A Question of Faith, which is about three ducks and bad judgement and All-American Funnies, a 1-pager about a wrong number. The book will premiere at SPX later this month and be in stores in October.

I have recently found out that the Danny Hellman edited anthology Typhon will finally see print sometime in October. I'm not entirely sure who else is in this one, but I do know it's in color and is an almost square format. I submitted a 1-pager called Pentateuch Funnies starring Abraham. 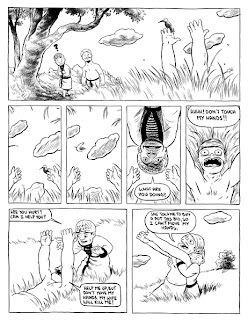 In January of 2008, I will be returning to the pages of Mome with issue #10. This one will have an Al Columbia cover and I'll have a 9 page story called The Ten Fools, that I originally roughed out for the Fables of India book that I wrote about here a few months ago. I'm glad I had an opportunity to finish the story and that it will see print in Mome.

At the moment, I'm about halfway through inking an 18 page comic called The Man Who Loved Breasts. This will be in a stand alone comic with some other stories and will probably be about 32 pages total, all by me. I'm hoping to get all of the work done by the end of the year and have it come out some time in 2008. I'll post more info as I know it, but for now, here is a preview page. 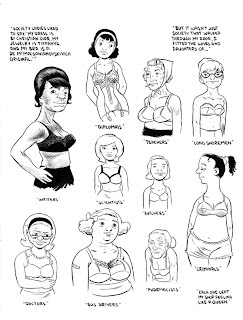 Posted by Robert Goodin at 6:47 PM