Stuff Left by the Street on my Block 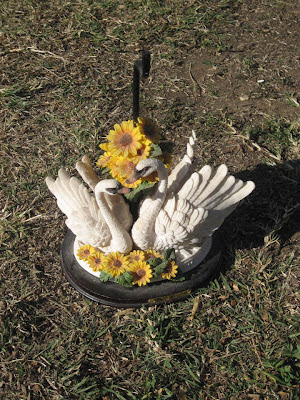 I often thought I could furnish a small apartment by simply picking up unwanted crap that people leave on my block. Here are some photos taken on two days about 2 weeks apart. On the second day I was stopped by some guys: Since these photos were taken on two different days, I'm showing twice as much as what is out any given day. I don't want people to think that I live in the ghetto. 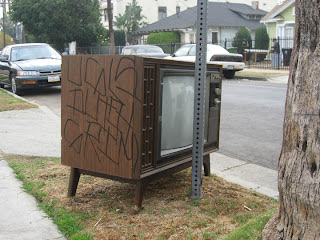 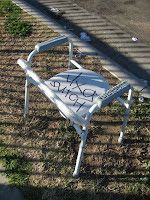 Sadly, in between the time of my two photo shoots, there was an almost complete chocolate cake laying by the curb. It sat there for about 4 days. I wasn't sure if someone didn't feel like eating it and thought maybe someone else on the block may like it, or if they just dropped it while taking it out of their car and left it there. I kept thinking that I had to get a picture of it, but then it was gone. 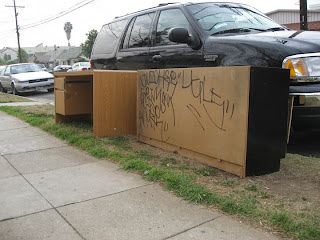 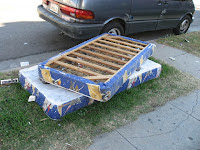 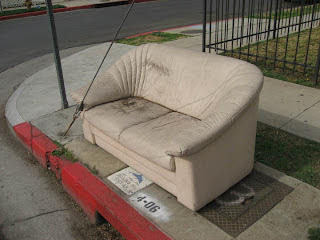 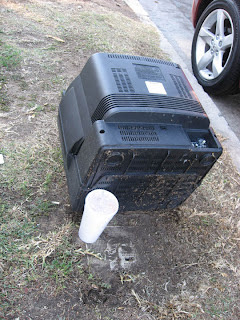 Posted by Robert Goodin at 4:15 PM

Is there anything sadder than "street cake?"

Someone left the cake out in the rain.

Steve- You've just given me the name of my band and debut album.

Chris- Haven't talked to you in a while, Chris. I checked out your kid drawings through Joe's website as well. When I get all of this blog stuff figured out, I gotta link to all my pals' sites.

Ummm... I don't actually know you, but I've read a lot of your minicomics. I'm checking out your blog by way of Indie Spinner Rack.

I'm writing, though, because those pictures totally look like my old neighborhood in LA (on Bellevue, about four blocks west of Silver Lake Blvd, sort of in Silver Lake). A steady stream of trash left out on the street. There was a toilet bowl parked next to my car for about two months. Someone else left out a skunk corpse that had been nailed to a board, shellacked, and painted around as some sort of art project.

For the past couple of years there was this old hispanic lady, skinny, maybe just under five feet tall, always wearing a baseball cap, an apron, and rubber gloves. She'd push this wire, wheeled grocery cart thing around and carried a pole with a hook rigged up at the end. She'd rummage through everyone's dumpsters a couple of times a day -- always early in the morning, at least. She'd take stuff she liked away in her cart, and she'd pull out stuff that she thought might still be good (clothes, pots and pans, food and miscellaneous) and lay it all out in a display, either on top of another dumpster or on whatever abandoned furniture was nearby, and leave it there for people to pick up without having to rummage through the trash themselves. I figure she must have lived in the area, probably not homeless -- she seemed to be on a mission rather than down-and-out. Sometimes she'd wear a pair of pajama pants, black with a print of these lips next to the line "I'm too sexy for my pants" all over them.

Anyway, thanks for posting the pictures; I had to show them to my wife. We left LA in September and I'd forgotten all about that.

You lived not too far from me. I'm in east Hollywood, where Los Feliz and Silverlake tend meet by Vermont Ave. and Fountain Ave. Your stories of strange trash are great. Most of the stuff I come across isn't so surreal as a shellacked skunk. It's just shit. It is funny though that after I decided that I would do a regular feature of trash found on my block, my block stopped providing. It's almost like the block god started reading my blog and got embarrassed. Weird.

I did come across a passed out Mexican guy on the sidewalk at 2 pm last week. It was weird because there was grass nearby, but he was on the hard sidewalk. I regretted not having my camera, but my wife said that taking a picture of him would be mean. I was wondering at what time he started drinking to pass out at 2 in the afternoon?

Years ago, a pal of mine moved into a place by Melrose and Western. The roommate that he replaced had nailed one potato above every door in the house. By the time my buddy moved in there the crucified potatoes were beginning to shrivel a bit and sprout. This same old roommate also left behind a wood plaque with a photo of an astronaut on it. Below the astronaut is said something like "Giligan, where are you?". On both sides of the plaque were written the days of the week in order, but quickly got messed up with a Monday, Wednesday, Sunday. It was crazy. His stuff reminds me of your skunk. Maybe he moved to Silverlake.