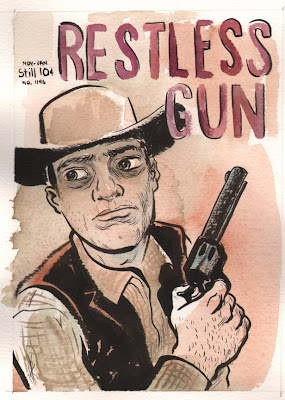 A few months ago I started another blog called, Covered which features artists redrawing comic covers in their own style. The blog has gained enough popularity that I am able to post a cover a day, Monday through Friday. In fact, I get so many submissions, I have had to reject some, including my own. These are both attempts to cover Dell's Four Color 1146 (Restless Gun), that I never did get quite right. The version up top was the second version and I think better of the two, but still seems a little stiff and timid. I thought I would try it again, but instead turned to a Donald Duck issue.