The Man Who Loved Breasts 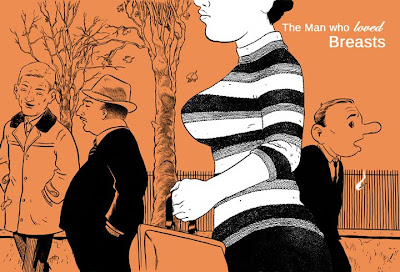 The Man Who Loved Breasts is currently in the Diamond distributor catalog for an October release. Top Shelf has a 6 page preview of the title story up on their website. The pages are my roughs, but I think they may get switched out for the final version any day now. I suppose it might be interesting to see my grammatical errors, how poorly I spell, and also how I can't seem to draw my protagonist consistently. I think I corrected these in the final version. Anyway, I'm digressing...

I'm mentioning this now, because if you don't think your local comic shop will carry my comic, this is a good time to tell them that you want to get it. This is when they are ordering for October releases. Tell them you want the comic and tell them they need to carry it. Tell them that tits sell, especially to comic readers, and that it can't miss. Tell them that amputee fetishist comics are going to be the biggest thing since mutants. Tell them anything. I just don't want it to tank.
Posted by Robert Goodin at 9:14 PM 2 comments: 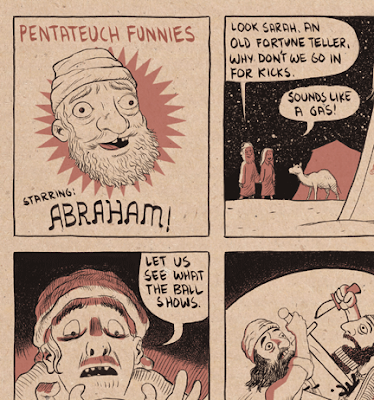 I received my copy of "Dirty" Danny Hellman's new comic anthology, Typhon, today. I did a one page story I'm pretty pleased with called: Pentaeuch Funnies Starring Abraham. The book also has some stories by R. Sikoryak, Rich Tommaso, Pshaw, Derek Ballard, and a bunch of artists I'm not too familiar with. I look forward to reading this almost 200 page monster to discover some new folks. More info about it here.
Posted by Robert Goodin at 8:48 PM No comments: 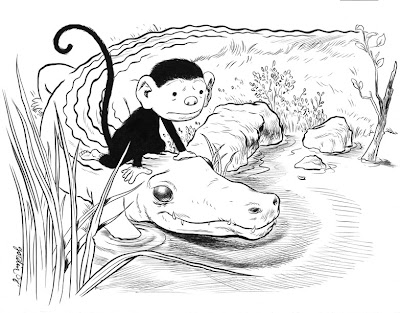 At San Diego, a fellow asked if I did commissions. I'd never been asked before, but thought it might be fun. He wanted me to draw an animal. After being sick my first week after the show, I got to work this week. I decided to draw the monkey and the crocodile from the fable I drew a few years ago. This scene is of the two of them entering the river for a fateful trip at the end of the story. I was right at San Diego; it was fun. I hope you like the drawing, Joshua. It's in the mail.
Posted by Robert Goodin at 9:56 PM 6 comments: 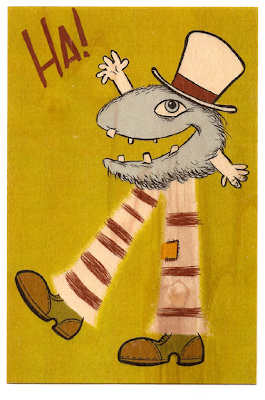 I've just added my 2 latest postcards to my online store. These debuted at San Diego a couple of weeks ago. Both cards are available here. 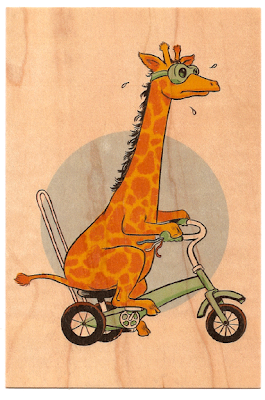 Posted by Robert Goodin at 10:16 PM No comments: I love looking through old comics at San Diego. The comic dealers have been getting squeezed out over the years for Hollywood, the Suicide Girls, and medieval armor manufacturers, but there are still some great finds out there. I came across two fantastic Wonder Woman comics while digging through the long boxes. The first one is a cover that I believe I first saw on The Comics Reporter and immediately fell in love with it. The image on the cover pretty much says it all. Wonder Woman is in a bridal gown holding the arm of a monster in a tux. Pretty clear. However, in case you are a little slow, we've got an Amazon thinking "Great Hera! Wonder Woman still doesn't realize she's marrying a monster!" Ok, she's marrying a monster. Got it. However, for the confused, we've got the comic's title "I Married a Monster!" plastered on the cover. Then at the top, in case you haven't yet realized who Wonder Woman might be marrying, we've got "Introducing... Mr. Monster!". Fabulous. The story is good too. Mr. Monster is a real dick and Wonder Woman can't help but to fall in love with the guy. I'd love to do a sequel to this.

The second issue I passed on buying, but I still love the cover. There's Wonder Woman, dangling from a ridiculously phallic building, while Giant Wonder Woman gives it a hug. Then, the finest touch of "Hate you" scrawled by some young girl (I hope) onto Giant Wonder Woman's chest. Add some demon eyes colored in for good measure and you have one of the best comic covers of all time. Thank you Comic Con.